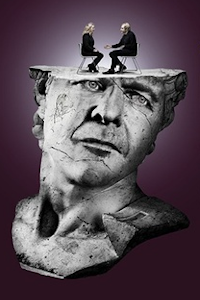 T02032976034
A Scattering - Reid's award-winning lyrical narrative, written in response to the death of his wife, articulates beautifully emotions which most of us find hard to express. It won the Costa Book of the Year Award in 2009. Performed with original composition for viola and cello by Tom Smail. The Song of Lunch - A lunch at an Italian restaurant in Soho - an attempt to rekindle an old flame. As the wine flows, nostalgia gives way to something closer to the truth. Poignant and hilarious, The Song of Lunch is a superbly crafted drama of a disastrous date. Performed with an animated setting by the Daily Telegraph's Alex cartoonist Charles Peattie.Archive :: production:T02032976034, play:S1930760924, venue:V331

A Scattering/The Song of Lunch

The appearance of any member of cast is subject to change and may be affected by contracts, holiday, illness, or events beyond the producers' control.