The End of History... 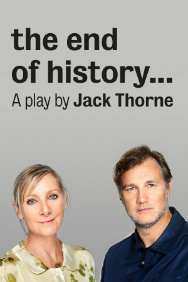 T313013808
"No talent at all when it comes to cooking - as you will discover - but when it comes to pissing off my children - immense talent - Olympian talent." Newbury, 1997. Sal is attempting a cook dinner for the family. She and husband David have pulled off a coup and gathered their brood back home for the weekend. Eldest son Carl is bringing his new girlfriend to meet everyone for the first time; middle daughter Polly is back from Cambridge University for the occasion; and youngest Tom will hopefully make it out of detention in time for dinner. Sal and David would rather feed their kids with leftist ideals and welfarism than fancy cuisine. When you've named each of your offspring after your socialist heroes, you've given them a lot to live up to... "When I was your age I wanted to be in a band and sleep with Mick Jagger - and Jimi Hendrix - so who am I to judge the choices you've made so far?"Archive :: production:T313013808, play:S1935885131, venue:V411