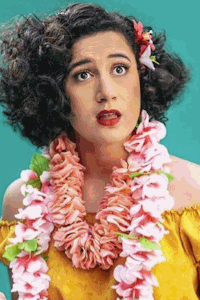 T0879496511
In 2016, Rose has been nominated for Best Newcomer at the Melbourne International Comedy Festival and also made her Edinburgh debut this year with her show Finally Dead, which enjoyed success from both audiences and critics. The Guardian described it as "an emphatic start to Matafeo's fringe career" .Rose started stand-up at the age of 15 and has since staged five solo shows as part of the New Zealand International Comedy Festival. In 2010 she won Best Newcomer at the NZICF, going on to win the prestigious Billy T Award in 2013. Her sold out show Finally Dead saw her add extra shows and a return season in NZ.Archive :: production:T0879496511, comedy:S02083699190, venue:V382

Rose has kissed nearly ten men a.k.a. she's a total horndog. It's a stand-up/sketch show about the things she likes! Please note: This performance is being recorded so no latecomers admitted. By attending this performance you consent to your image being used in the broadcast.