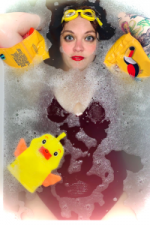 T800539685
Jane is dangerously bored. Her boyfriend Jo is more into his gamer score than her current existential crisis. Apparently, her best friend Fran's latest spiritual awakening came courtesy of a hairdryer in the bathtub... but that's definitely a step too far for Jane. How far will Jane go? Because when her value is measured in 'likes' and 'clicks', who is she if nothing ever happens? Happenings is a pitch-black comedy which quickly descends into an uncomfortably close viewing of three thirty somethings, who were promised the world and are now feeling distinctly short changed. Set in a seaside town under cliffs where the wretched come to end their struggles, it's hard to evaluate how bad things really are for you, when you live under the shadow of a famed suicide spot. Things aren't great, but they're all ok... right? Fran claims to have found a higher state of consciousness from it all and Joe is happy enough burying his head in the sand. It's Jane that can't breathe. The monotony, the boredom, the lack of something to tweet about; life doesn't seem this dull for anyone else. She needs something to happen... Otherwise what's the point?Archive :: production:T800539685, play:S0980979916, venue:V0719079091
Current production:Tour/Production