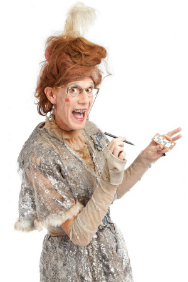 T1011206196
Ida Barr is the creation of Olivier-award winner Christopher Green also known for BBC Radio 4 favourite Tina C. Ida has graced stages at the National Theatre, Tates Modern and Britain and the Barbican, as well as livening up many a variety and comedy night around the globe. She's appeared in her own series, Artificial Hip Hop, on BBC Radio 4 with special guest, the beatboxer known as Shlomo.Archive :: production:T1011206196, cabaret:S02053680702, venue:V0324280152

Ida is keeping it real. Politicians have proved over and over that they can't be trusted. "Power to the people!" shouts Ida from her sheltered accommodation in Dalston. Nothing will be the same again after a night of social agitation and tiny acts of rebellion using protest R&B and dissident songs from the 19th century all rapped up in a communal hip-hop style with mass singalongs and lots of the most revolutionary tool of all - laughter! Underbelly Festival Southbank