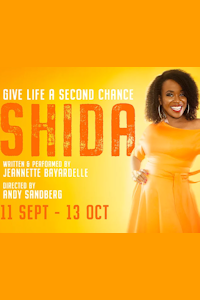 T0551135127
Set to a score of rock, jazz, R&B, and gospel music, Shida is based on the true story of a young African-American girl who aspires to become a writer, tracing the ups and downs of her family, friendships, and love life - from the double-dutch court at St. Mary's Catholic School in the Bronx to a scholarship at NYU. Her dreams become sidetracked by hardship and loss until her faith and those closest to her combine to restore Shida's hope and give her a second chance.Archive :: production:T0551135127, musical:S1403200264, venue:V01067696945