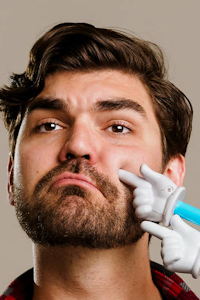 All I Wanna Do Is

"All I Wanna Do Is [FX: GUNSHOTS] With a [FX: GUN RELOADING] and a [FX: CASH REGISTER] and Perform Some Comedy!" One of the Edinburgh Fringe's most celebrated talents of recent times sets out on his first full national tour. John-Luke Roberts' show this year was a complete sell-out run and one of the most talked-about shows of the festival: a dizzying avant-garde ride through the mind of a gifted comic-philosopher. One with a blue moustache. Who thinks far more about the Spice Girls than anyone should. A masterclass in prop, clown, costume and Mel C-themed comedy. And that's all we can tell you in the brochure, because his stupid title takes up the rest of the allotted space.