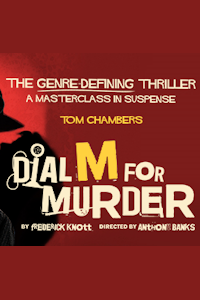 T0248099801
An intense and darkly gripping thriller, famously filmed by Alfred Hitchcock. Tony is convinced his wife is having an affair. We watch mesmerised at Tony's precision in planning what must surely be the perfect murder... until it falters in the most unexpected way.Archive :: production:T0248099801, play:S01596173992, venue:V923
Current production:Tour/Production

Liz (11Mar20): Oh dear have I missed something! Acting far too over the top with dramatic gestures very distracting. Film cannot be bettered . This is now creaky and showing its age. Some dialogue very indistinct.