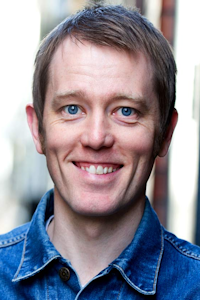 T790628638
A no-nonsense comedian who specialises in funny nonsense. Much of Alun's comedy begins simply as something he's seen, heard or felt in his own life, or in the street, or the kitchen, or anywhere and from that it blossoms into a highly amusing anecdote or a strange flight of fancy.Archive :: production:T790628638, comedy:S01279151764, venue:V855

Things That Happened To Me In Life, Or In Cafes

Alun Cochrane is a laid back comedian who makes his living chiefly by recounting everyday things that have happened to him in life or in cafes. His comedy is warm and intelligent and has led to appearances on several radio shows including ‘Just A Minute’ and TV performances on ‘Have I Got News For You’, ‘8 Out Of Ten Cats’, ‘Mock The Week’ and ‘Never Mind The Buzzcocks’. He is a regular at the Edinburgh Fringe with three consecutive highly acclaimed sell-out solo shows, winning the Writer’s Guild Award in 2004.