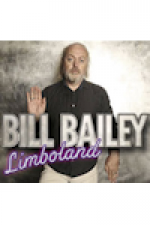 T243656160
British Comedy Award winner Bill has enjoyed success on the live stage for many years. In 2001 he took his show Bewilderness to New York for an eight week run at the Westbeth Theatre. The New York Times wrote of him, "Bill is an unalloyed pleasure, a treat for the funny bone, the brain and the ear" and The Telegraph pronounced him "a hobbit with a wicked sense of humour". In 2004 he performed his show Part Troll at over fifty venues around the UK, culminating in an extended run at London's Wyndhams Theatre. In 2007 he embarked on a sold-out UK arena tour with his audio-visual, comedic extravaganza, Tinselworm. He took the show down under during the summer of 2008, touring Australia and New Zealand, before returning to London in December 2008 for a ten week run of the show at The Gielgud Theatre. The summer of 2009 saw Bill tour the UK once again with his live show, Bill Bailey Live. Last autumn, following his performances at London's Royal Albert Hall and the resulting critically acclaimed BBC2 television broadcast, Bill enjoyed a very successful UK tour of his musical comedy extravaganza, Bill Bailey's Remarkable Guide to the Orchestra. Performing alongside some of the UK's finest orchestras, the show provided fans with the opportunity to see Bill's surreal comic and musical imagination at its best and was described by The Telegraph as "a glorious achievement," The Guardian as "sublime hilarity" and Stephen Fry as "wonderfully enjoyable... like driving a Rolls-Royce off-road."Archive :: production:T243656160, comedy:S5697, venue:V417
Current production:Work

The gap between how we imagine our lives to be and how they really are is the subject of Bill's new show LIMBOLAND. With his trademark intelligence and sharp wit, he tells tales of finding himself in this halfway place. From his countless global travels, he recounts the hilarious saga of a disastrous family trip to Norway to see the Northern Lights. He rails against a world that doesn't match up to our expectations and contemplates the true nature of happiness. And no Bill Bailey show would be complete without music, so we have Bill's version of the protest song, a heart--rending country and western ballad played on a Bible, and a fabulously downbeat version of Happy Birthday.