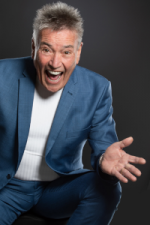 T2014117968
National treasure, and without doubt one of Britain's most talented and best loved comedians, Billy Pearce emerged from the fertile talent fields of Butlins in the mid 1980's. Multi Award winner Billy, has won just about every comedy award going, including a British comedy award, Solo comedian of the year, and Best television comedy newcomer at the London Palladium.Archive :: production:T2014117968, comedy:S432612901, venue:V101
Current production:Work

Yorkshire born Billy Pearce emerged the tough training grounds of the northern club circuit to become one of Britain's most talented comedians. Born in Leeds, he came to national prominence when he appeared on New Faces in 1986. He was quickly snapped up for stage and TV appearances. In total, Billy has performed in five children's Royal Variety shows and three Royal Variety shows.He loves singing acting and dancing!