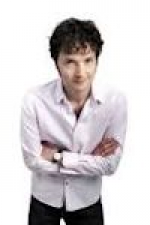 T0759747556
Star of the BAFTA winning comedy The Thick Of It, and his own BBC TWO sitcom Lab Rats, Mr. la-di-da smartypants Addison is also regarded as one of the most versatile stand-ups in the country. With his pacy, energetic routines and faultless delivery, he has charmed audiences, Perrier judges (who nominated him twice) and critics alike as a top class purveyor of smartarse daftness, whimsy, perspiration, lies, jokes and flapping about.Archive :: production:T0759747556, comedy:S6170, venue:V101

The Time is Now Again

Fresh from The Thick of It, Mock The Week, Have I Got News For You and his sell-out 2010 tour, Chris Addison, the man who put the 'Chris Addison' into, 'I see Chris Addison is touring, again,' is touring again. He's written a brand new show, The Time Is Now, Again, specifically for the venue this brochure/leaflet refers to.* (*And about 40 others, but the point still stands.) Top class stand-up from one of the classiest, toppiest stand-ups around. You should come and see him.