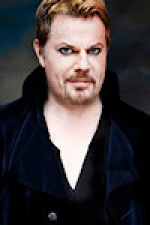 T0817312832
Eddie Izzard has been hailed as one of the foremost stand-ups of his generation. He takes ideas and situations and extrapolates then into bizarre, tangential, absurd and surreal comic narratives. Since his first stage appearance on London's West End in 1993 there have been a succession of sell-outs and critically acclaimed international tours. Eddie's musings have earned him countless awards including two Emmy Awards. Whilst initially renowned as a comic, Eddie is also now equally respected as a film, Theatre and TV actor.Archive :: production:T0817312832, comedy:S5713, venue:V553

Eddie Izzard begins his world tour in Bexhill with a show developed from his 1998 North American tour Dressed to Kill. Eddie recently played to an audience of over 11,000 at Wembley Arean - a British record for a comedy performance - and continues to delight with his highly original humour.