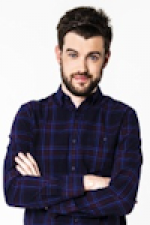 T583537040
Jack's always wanted to be a real man, like the ones in the audience at Top Gear, but unfortunately he likes Smirnoff Ice and looks wrong with his shirt off. Jack has firmly established himself as one of the country's most exciting and successful comedy talents, a status cemented by his People's Choice Award for the King of Comedy at the 2012, 2013 & 2014 British Comedy Awards. He cut his teeth at the Edinburgh Fringe, taking up four sell out shows over three consecutive years and earning an Edinburgh Comedy Award nomination in the process with his debut show. Jack has since gone on to host Live At The Apollo and the Royal Variety Performance, as well as perform stand-up at the internationally prestigious Just for Laughs Comedy Festival in Canada.Archive :: production:T583537040, comedy:S01979782362, venue:V0838583178

Let's Not Speak of This Again

British Comedy Award nominee Jack Whitehall has already made a huge impact on the comedy world. So far he s guest hosted Never Mind the Buzzcocks, had the honour of performing for the Prince of Wales on the Royal Variety Performance and is a star of Channel 4 s Stand Up For the Week. People say you learn from your mistakes, Jack reckons that s bollocks and we stumble through life making the same mistakes over and over again. We just get slightly better at dealing with the fallout!