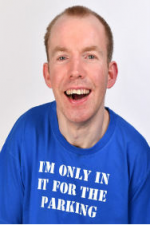 The Britain's Got Talent winner will poke fun at his life living as a disabled person in a post-apocalyptic world, as he tries to cope with the fame and fortune since his memorable victory. From the highs of meeting 50% of The Chuckle Brothers to the lows of being called ‘him off The X Factor', and everything in between.