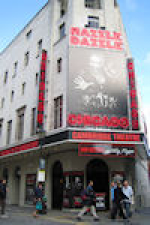 Stand-up comedy sets and live music. Comedian, comedy writer and broadcaster Linda Smith died from ovarian cancer in 2006 at the age of 48. She started her career in professional theatre and comedy, winning awards for her stand-up before breaking into radio, gaining the title of "wittiest person on the planet" as voted by BBC Radio 4 listeners in 2002. She kept her diagnosis quiet, not wanting to be seen as a patient, and died just three years later. Linda's partner Warren Lakin has since been tirelessly raising funds for Target Ovarian Cancer through the Loving Linda comedy gala, a fantastic star-studded evening. This year will see the eighth event, featuring some of the best-known comedians in the UK including Ruby Wax, Angela Barnes, Dr John Cooper Clarke, Mark Steel and many more.