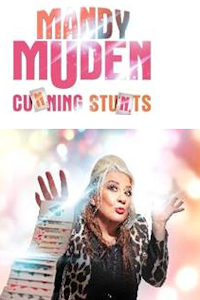 Mandy Muden, whose sensational appearances on the 2018 Britain's Got Talent, won critical acclaim from both judges and public alike, takes to the road in 2019 with her first solo tour CUNNING STUNTS - a brand new hilarious show. CUNNING STUNTS will be packed with Mandy's razor sharp wit, magic tricks and plenty of mind reading! A member of the Inner Magic Circle with gold star, Mandy is the premier female comedian and magician, and in fact in 2007 was the recipient of the Magic Circle Carlton Award for Comedy in Magic. On TV Mandy has appeared on Dick and Dom's Funny Business and as a mentor on Channel 4's Faking It. Starting out life as an actress, having trained in Guildford, Mandy has been honing her magic skills for many years. Her initial foray into the world of magic was working in a Circus as a magician's assistant but somewhat accident prone she managed to set fire to her caravan and had a run in with a boxing kangaroo!