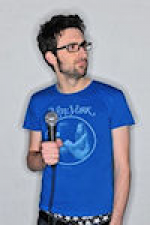 'Why aren't you coming to Berwick?' 'Why do you never visit Shropshire?' 'Is there a specific reason for your endless neglect of Chorley?' Most people aren't troubled by questions of this sort in their everyday lives, but Mark Watson is. Every time he announces a set of tour dates, there are disappointed tweets from all corners of the UK not covered by his travels. Why are you going to Southampton instead of Inverness, people demand. What's the matter with Ipswich? Do you hate the Isle of Man? And this is in spite of Mark's reputation as one of the hardest-working and most-constantly-travelling comics around. It almost seems as if the only way to ensure happy gig-goers is if he allow fans to dictate his entire schedule. Last year, via his daily blog, Mark invited fans to suggest destinations for his 2011 shows. Over the past few months he's been sifting these suggestions, weeding out ones like Gaza posted by people seeking to trap and kill him, and calculating the most popular choices from what remained. From now until Christmas he will traverse the country to perform at over 50 specially requested towns. He'll dole out a mixture of old favourites and new material, experimental stuff and greatest hits to those who have previously been deprived of his trademark frantic wit, rambling, emotional neediness etc.