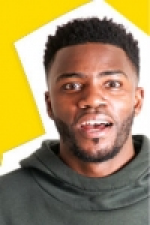 T0998119815
With his high-energy style and stunning physicality, Mo has become one of the UK's fastest rising social media stars with an online reach running into the multiple millions. His sketches regularly go viral, trend and are co-signed by some of the most famous names in international music including Drake and Stormzy.Archive :: production:T0998119815, comedy:S2011775832, venue:V417
Current production:Work

AKA Mo The Comedian: Couple Cans

He's already collaborated with the likes of The BET Awards in Los Angeles, hosted Tinie Tempah's Ibiza closing party performing to over 10,000 people and consistently hit well over a million views for every new sketch offering he has released on social media. Combining music with perfectly pitched observational comedy, Mo Gilligan is fast becoming not just a heavyweight social media influencer but a voice of his generation, perfectly representing the very modern future of British comedy.