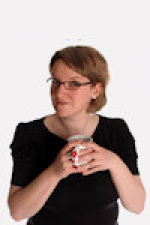 T0580701106
Since winning the 2008 if.comedy Best Newcomer Award for her debut solo show Sarah Millican's Not Nice at the Edinburgh Fringe Festival, Sarah is fast on her way to becoming a household name. She has already notched up a number of appearances on top comedy shows including Mock the Week, Michael Mcintyre's Comedy Roadshow, Have I Got News For You, 8 Out of 10 Cats, Live at the Apollo and The Bubble.Archive :: production:T0580701106, comedy:S01706946298, venue:V0838583178
Current production:Work

In the past when you put Sarah Millican outside, she asked things like: 'Why? Where is the taxi? Do I need a cardie?' and said things like: 'There'll be wasps. I've nothing to sit on. Is that poo? Can we go home?' But things have changed. Now she has outside slippers. She can tell a chaffinch from a tit (hey). But she still can't tell if it's an owl or her husband's asthma.