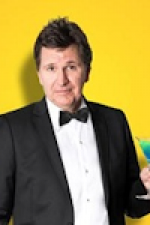 T787383168
An internationally acclaimed stand-up comedian, accomplished actor and writer with guest spots on Mock the Week, Michael McIntyre's Comedy Roadshow and 8 Out of 10 Cats, Stewart Francis is one multi-talented performer. Stewart has made numerous television appearances. He's a regular guest on The Late Late Show with Craig Ferguson, he is the host of trivia game show You Bet Your Ass, and in Britain, his TV appearances include The Comedy Store, Live At Jongleurs and The Big Stage.Archive :: production:T787383168, comedy:S02135713694, venue:V1047

Comedy sensation and star of Mock the Week, Live at the Apollo and Crackerjack, Stewart Francis embarks on a brand-new show, in this, his last tour EVER! See him before he heads off... INTO THE PUNSET.