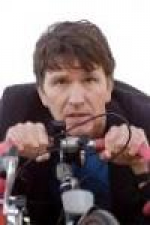 T1280161850
An internationally acclaimed stand-up comedian, accomplished actor and writer with guest spots on Mock the Week, Michael McIntyre's Comedy Roadshow and 8 Out of 10 Cats, Stewart Francis is one multi-talented performer. Stewart has made numerous television appearances. He's a regular guest on The Late Late Show with Craig Ferguson, he is the host of trivia game show You Bet Your Ass, and in Britain, his TV appearances include The Comedy Store, Live At Jongleurs and The Big Stage.Archive :: production:T1280161850, comedy:S02135713694, venue:V803084951

Like To Laugh? Lonely, well-endowed, white Canadian male, with dreamy hazel eyes, 6ft. 4 inches, 40+, now living in London. Many interests include, sports, cheese, hearing laughter and prompting encores... Seeks free-thinking, slim audience, with nice legs, 18-75, must be willing to go to The Rondo Theatre to watch Canadian comedian Stewart Francis, who you may have seen before on "Michael McIntyre’s Road Show" BBC1, "Mock The Week" BBC2, "For One Night Only" ITV1, "8 Out of 10 Cats" CH4.