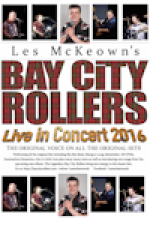 T1185931653
The biggest pop sensation of the 1970s invites you to take a trip back in time for an evening of hit songs and teenage memories. Les McKeown was the original voice on every Bay City Rollers hit worldwide and now he will be joined by his fellow Bay City Rollers to relive the songs and excitement that sold over 300 million albums worldwide. The Bay City Rollers enjoyed five years of unprecedented success when they dominated the pop music charts across the globe with number one hit singles in over 40 countries, filling the biggest stadia wherever they went. Their first two albums, Rollin' and Once Upon A Star, stayed in the UK album charts for 99 weeks between 1974 and 1976 by which time the group were also consistently in the US top ten with songs such as Saturday Night, their first US number one I Only Wanna Be With You and Rock and Roll Love Letter.Archive :: production:T1185931653, concert:S0274809438, venue:V101