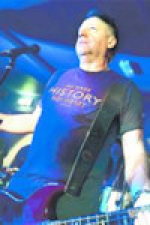 and The Light: New Order's Movement and Power, Corruption & Lies

This time Peter is celebrating the first two albums of Manchester pop giants New Order, with whom he was the bassist from 1983 to 2007. Returning with his band, The Light, Peter will play both of these seminal British pop albums of the 80s in full, with the first, 1981's Movement, containing such memorables singles as Temptation, Dreams Never End, Truth, Senses, Chosen Time and Denial, while Power, Corruption & Lies (which reached No.1 in the UK album & Indie charts in 1983) features Age of Consent, 586, We All Stand and, of course, the floor-filling Blue Monday. Not to be missed! Summer Pops Week 2013