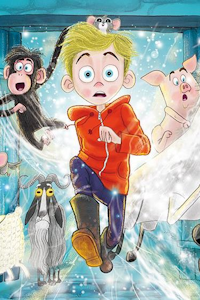 T1986466474
Malcolm doesn't like animals, which is a problem because his family love them. Their house is full of pets. What the house is NOT full of is stuff Malcolm likes. Such as the laptop he wanted for his birthday. The only bright spot on the horizon is the Year Six school trip, which Malcolm never thought his parents would pay for. And yet there he is, on the bus, heading to....oh no. A farm. After a bizarre school trip unlike any other, Malcolm begins to understand animals more deeply than anyone. But will he end up the same as before? Because sometimes the hardest thing to become is... yourself.Archive :: production:T1986466474, kids show:S01508259859, venue:V764