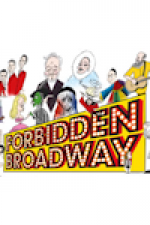 T1428499982
Forbidden Broadway was first seen at Palsson's Supper Club in New York January 1982. Unemployed actor Gerard Alessandrini wanted a showcase for his talents and put together as a nightclub act, a selection of some of the musical parodies of Broadway shows he had written. Lauded by critics and audiences alike Forbidden Broadway has since become New York's longest running musical comedy revue, winning Drama Desk, Obie and Outer Critics Circle Awards, and recently receiving a Tony Honor.Archive :: production:T1428499982, musical:S691976043, venue:V417

This updated version of the show, from Broadway's director Phillip George, showcases some of the best productions from both Broadway and the West End, including The Book of Mormon, Once, Matilda, Wicked and Miss Saigon.