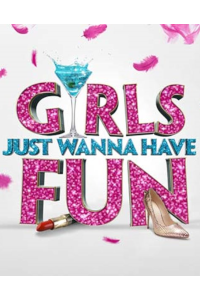 T1311612142
Join the star cast of four refreshingly honest and unreserved girls on a riotous evening of hilarious comedy and classic pop anthems that define being a 21st Century woman. We take a no-holds-barred comedy romp through everything life throws at a modern day woman, dating, relationships, breakups, fashion, dieting, chocolate, more dieting, sex, going out, staying in, wine, more wine and of course, men. All are thrown under the microscope of uproarious dissection - no subject is too taboo! Get involved and come along to channel your inner diva because Girls Just Wanna Have Fun!Archive :: production:T1311612142, musical:S01332049471, venue:V01913084837
Current production:Work

From the writers of the hit comedy Hormonal Housewives, Girls Just Wanna Have Fun is the brand new musical comedy show that does exactly what it says on the tin.