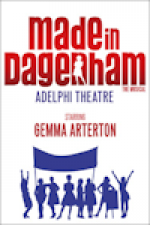 T1135785133
Based on the movie, in turn based on a real life incident. It's 1968, and the Ford auto factory in Dagenham is one of the largest private employers in Britain. In addition to its thousands of male workers, it employs 187 underpaid women machinists who assemble car seat upholstery in lousy working conditions. Shop steward Rita O'Grady joins with union rep Albert Passingham to get a better deal for these hard-done-by women, but soon discovers there's more to the dispute than she realised; women are paid an appalling fraction of the men's wages for the same work across the board. Refusing to put up with it any longer, Rita leads a strike for equal pay. A grinding labour and political struggle follows that will ultimately advance the cause of women's rights around the world.Archive :: production:T1135785133, musical:S1000750812, venue:V379

News: Made in Dagenham
03Mar14: New musical based on the film