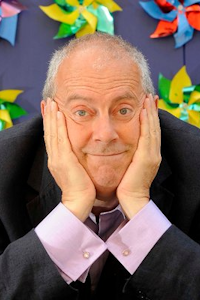 An Audience with Gyles Brandreth

They say all political careers end in tears - in Gyles Brandreth’s case its tears of laughter as the writer, broadcaster, former MP and government whip takes us on an hilarious no-holds-barred roller-coaster ride around the corridors of power - from Westminster to the West End. With a cast-list that runs from Gordon Brown to The Queen - via Oscar Wilde, Sir John Gielgud and Fozzie Bear - this is a wonderfully witty and revealing entertainment from an award-winning raconteur with unique tales to tell from his unlikely life in the theatre, television, journalism and politics. Remembered for the colourful jumpers he wore on TV in the 1980s, his recent TV appearances include Have I Got News for You, QI, Room 101, Countdown and Celebrity Mastermind. In 2003 he was the subject of This Is Your Life. Currently he is a reporter with BBC1’s The One Show and a regular on Radio 4’s Just a Minute. Gyles Brandreth is brilliant . . . incredibly funny, wildly indiscreet. Daily Mail Not merely, like all the best after-dinner speakers, does he know how to spin a yarn - he has a touching access to the secrets of the human heart. The Times