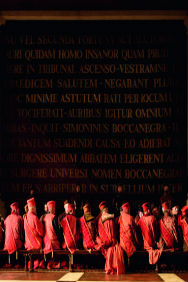 T976859456
Simon Boccanegra, a corsair, and his lover Maria have a child, but Maria dies in childbirth and her father (Fiesco) refuses to acknowledge Boccanegra as his son-in-law. Boccanegra is later elected Doge of Genoa and, as the years pass and his power grows he is plotted against by Fiesco and Adorno (a young nobleman in love with Fiesco's ward). Boccanegro recognises Fiesco's ward as his lost daughter but is poisoned - the parties are reconciled as Boccanegra dies and declares Adorno his successor.Archive :: production:T976859456, opera or operetta:S2088, venue:V377