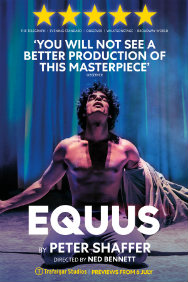 T067863090
In a Hampshire stable, a youth blinds six horses with a metal spike. Convicted of this appalling crime, seventeen-year-old Alan Strang is sent to a secure psychiatric hospital. Martin Dysart, the child psychiatrist assigned to him, begins to probe Alan's past in an attempt to understand his motives. Initially the boy is silent and uncooperative, but as Dysart digs deeper, he begins to win Alan s trust and the truth gradually emerges. Finally, as Alan struggles to be free of his demons, he must relive the events of that terrible night. Inspired by a true story, Peter Shaffer's unique psychological thriller explores the complex relationships between worship, myth and sexuality. Equus contains strong language, adult themes and nudity. The play won both the Tony Award and New York Critics Circle Award for Best New Play in 1977.Archive :: production:T067863090, play:S3180, venue:V420