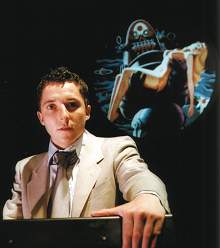 T728116043
Playing to sell out audiences at the Edinburgh Festival 2001, NEUTRINO takes its name from a sub-atomic particle that is so small it is almost impossible to detect. The show makes the link between this almost invisible, yet essential part of every atom, and the possibility for wonder and beauty contained in even the smallest moments of human experience. Described by one audience member as being a cross between When Harry Met Sally and the Hitchhiker s Guide to the Galaxy, NEUTRINO was lauded as 'coolly stylish...it s confidence is rare and not at all misplaced' (The Guardian). The Scotsman heralded it as 'a rare thing, a show that manages to hard hitting and lyrical; on the cutting edge and beautiful.' and awarded it a Fringe First Award. NEUTRINO consists of several interlinked and intercut narratives. One is a series of short lectures backed up by genuine scientific research on 'the nature of complexity in smallness'. Like most scientific studies, it is at once totally absurd and totally plausible. Intercut with the increasingly fantastical lecture is the story of four people on a train who, bizarrely, find more and more points where their lives overlap. This becomes an exploration of the nature of coincidence and ultimately, the interconnectedness of all things.Archive :: production:T728116043, play:S01293492284, venue:V762