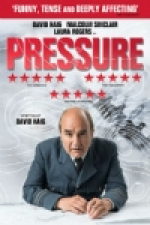 T0736401871
June 1944. One man's decision is about to change the course of history. An intense real-life thriller centred around the most important weather forecast in the history of warfare. Scottish meteorologist, Group Captain James Stagg, is ordered to Southwick House, Portsmouth, to advise General Eisenhower on when to give the order to send thousands of waiting troops across the Channel in Operation Overlord. In what was the most volatile June in the British Isles for over 100 years, the future of Britain, Europe and our relationship with our greatest ally, the United States, rested on the shoulders of one reluctant Scotsman. This is the extraordinary and little known story of Stagg, one great Scot who changed the course of war and our lives forever.Archive :: production:T0736401871, play:S853499282, venue:V382