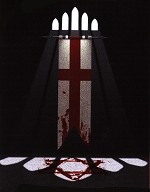 T791944119
In Lincoln in 1255, a conspiracy between the Church, the townspeople and King Henry III levelled the charge of ritual child murder against the Jewish community. Eighteen people were executed as a result. This dark episode of local history has inspired British theatre legend Steven Berkoff to create a compelling play, Ritual in Blood is an imaginative account of the events which led to the first recorded pogroms against the Jews in Europe, culminating in the expulsion of all Jews from England in 1290.Archive :: production:T791944119, play:S01809170949, venue:V457