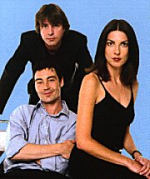 T156087469
When a hugely bankable star agrees to appear in a sure-fire commercial hit, film producers Bobby Gould and Charlie Fox are convinced this is the break of a lifetime. That is until Karen, a temporary secretary, derails the dream. When she persuades Bobby to dump the blockbuster in favour of a story which can only be described as box-office poison, Charlie is forced to resort to desperate measures... The original Broadway production starred Madonna while the British premiere was produced by the National in 1989.Archive :: production:T156087469, play:S5052, venue:V392