The Prisoner of Second Avenue 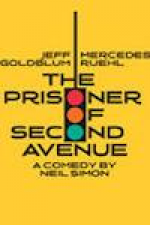 T815009978
Set in the 1970's, The Prisoner of Second Avenue is a black comedy depicting a New York couple, Mel and Edna Edison, enduring the trials and tribulations of city life. Mel is made redundant and the stress of an economic crisis and urban life pushes him into having a nervous breakdown. The family gathers to offer support, with Edna stoically bearing the burden of his disintegration and self-pity. The Prisoner of Second Avenue originally premiered on Broadway in 1971, starring Peter Falk and Lee Grant, where it ran for two years and received a Tony Award nomination. It was subsequently made into a film in 1975, starring Jack Lemmon and Anne Bancroft.Archive :: production:T815009978, play:S02028552039, venue:V417