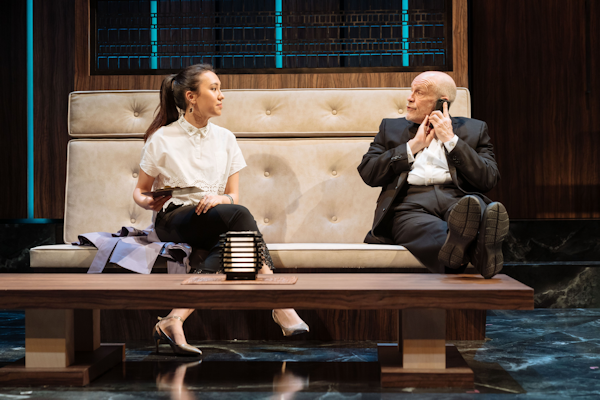 This is a very frustrating production.Some great acting and an impressive set but the play itself is really weak.

A play about a Hollywood mogul abusing his position and power in many ways, but paricularly over the female actors whose careers he can make or break, should cause the odd sharp intake of breathe and feeling of disgust - but this play goes or the laugh. The #metoo is, and will remain, vital and important but the peak of the revelations and revulsion was probably last year - for that reason I would have expected the play to be more reflective and incisive, more aware of the victim and more focussed on the downfall of an evil man. Instead we are 'treated' to a lightweight comedy with a ridiculous and unbelievable ending and a barely critical appraisal of the man at the middle, still working the angles as the play ends. It didn't perhaps help that John Malkovich's fat suite was barely credible, especially when he was lying on his back when it looked more like an overstuffed money belt.

The acting was top notch, I just wish we had had the chance to see them get their teeth into something more substantial. Doon Mackichan was particularly credible and watchable on stage and John Malkovich was excellent, though the character he played was not.

Impressive set, good pace but in the end, a disappointment.