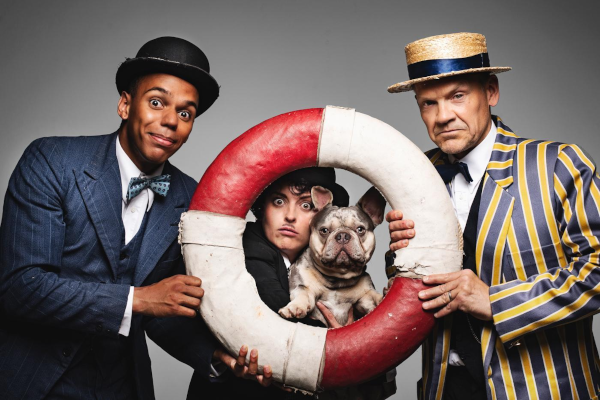 This play is based on the true events of 1910 when, the then unknown Charlie Chaplin and Stan Laurel shared a cabin sailing from Liverpool to New York as part of Fred Karno's famous music hall troupe. Told almost entirely as a silent film this is a slick, funny, physical, entertaining show from an hugely talented cast. Running for around 90 minutes, and they do run a lot, the pace is excellent and the story is engaging.

Jerone Marsh-Reid (Stan) and Danielle Bird (Charlie) perfectly capture their characters, not pushing their physical tropes too much, just enough for them to be instantly recognisable - these are the early days of their careers and it is as if those physical signatures are just emerging rather than being fully formed - as we see at the end when Charlie leaves the stage. Sara Alexander plays many parts, including the piano, and shows a real skill both at the keyboard and with her physicality - extracting every comic moment she can without ever upstaging the main plot and providing multiple additional characters. Nick Haverson's Fred Karno plays the villain (in silent movie terms), dad and drums giving the show a central core around which the action can revolve. Mostly, though, I would commend the cast as a single team - working together to produce a really novel and exciting show. Help and other bit parts were provided, excellently, by Harris Cain and Frances Knox.