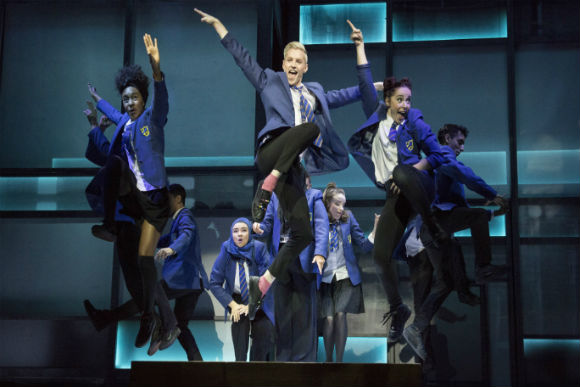 Everybody seems to have been talking about Everybody's Taling About Jamie - and now we know why. What a great new feelgood musical this is with an enthusiastic cast, good songs and a lot of fun thrown in.

John McCrea's central role as Jamie is a full-on performance ably supported by his mum (Josie Walker) and her friend Ray (Mina Awar) though it is his relationship with his friend  Pritti (Lucie Shorthouse) that drives the story. Based on a real boy this is about a boy taking up as a drag queen while still at school - will he go to the prom in a dress? Will his classmates reject him? A slightly predicatble but one the less well told story arc.

I'd prefer the Jamie character to build more at the beginning rather than coming straight in as out and the character of Dad is a bit weak giving Ken Christiansen very littl to work with but, to be honest, this is a flamboyant musical noy a play so perhaps these things don't really matter. Some really lovely songs, powerfully sung.

Great fun, great to see an uplifting new musical making itself known on Shaftesbury Avenue - well worth a ticket, if you can find one!

p.s. Nothing to do with the show, but around where I was the audience were awful. Two seats away someon left their phone on and it rang - they tried to ignore it and wait for it to ring off. The person next to me hadn't washed anytime recently, sang along to some songs and chatted to his friend throughout and the people behind me carried on an almost continuous conversation. Do people really not know the difference between their own living room and a theatre?