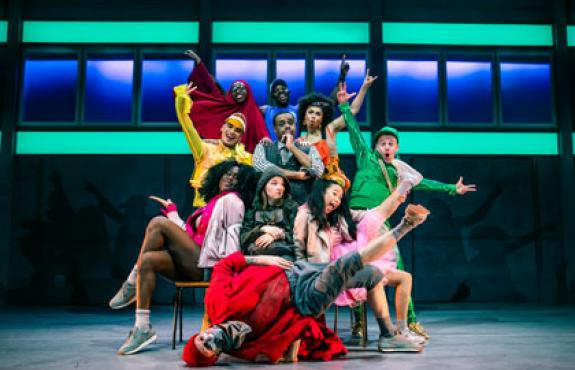 Some reviews are hard to write; others are not. This falls into the latter category. In fact, if I could write a one word review for this new British Musical by Metta Theatre it would be…..GO!

In case you need more persuasion…….

This colourful explosion of a musical based on Poppy Burton-Morgan's book brings a 21st century urban twist to the classic "Wind in the Willows". The combination of amusing rap lyrics, street dance choreography and a young exuberant cast make for an exhilarating and colourful evening.

Based in an inner city school 'The Willows' - a mix of teenage kids have to cope with the arrival of new kid 'Mole' (Victoria Boyce) who arrives introvert, full of angst and hiding a dark secret. Under the tutelage of Mr Badger (Clive Rowe) who tries to keep them on the straight and narrow while encouraging promising wordsmith Rattie (Zara MacIntosh) to follow her dream to 'get out' and go to university. It's not afraid to address the dark side of urban culture either - street gang 'The Weasels' mug deaf Otter (played by Chris Fonseca himself a deaf dancer) in the underpass, break into Toad's 'lily'pad and take up squatters' rights.

Rich kid 'Toad' (Harry Jardine) raps his way through the show; his number 'Easy Life' certainly one of the most memorable of the evening and like Kenneth Grahame's eponymous character finds himself in trouble after hot-wiring a motorbike.

Communication is central in this production – featuring inclusive signing and a sign language interpreter for the audience. In the narrative too, it touches on themes of violence, isolation, gang culture, guilt and ultimately friendship.

Vocally there is little to fault – alongside the rap and traditional musical storytelling anthems there are beautiful ballads which showcase subtler abilities of the main cast. With choreographers in the cast, and great direction from Rhimes Lecointe, dance is integral to the show and the unravelling of the rivalry towards the end. There are some almost burlesque scenes which prove this production isn't taking itself too seriously.

But there is little doubt it knows it's cool.

Whatever you might expect this musical to be. It isn't. If you have preconceptions they will be allayed.

As I said at the start just….Go!