Less Than a Year 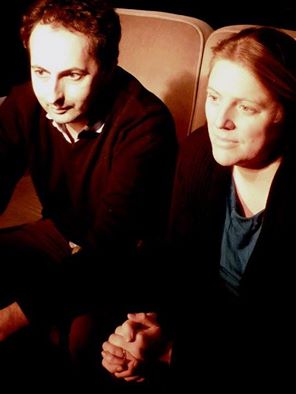 This is not the sort of theatre that falls into the category of "light entertainment", in fact arguably it is not entertainment at all but nor does it seek to educate, well not explicitly. What is does do, is deliver a story that will touch pretty well every member of the audience in one way or another, promote discussion of what is often seen as the undiscussable and, in my opinion, help people (or prepare people) to face similar life challenges.

If that sounds a bit of a wild claim let me explain .... this is a Theatre of Testimony piece, by which we mean that the words the actors speak are those of a real life couple describing the worst of all possible things, the slow painful death of a daughter. Unlike documentary the flow of the story is not interrupted by "interpretation" or other views, nor is this really a re-enactment ... it is just the re-animation of the raw and powerful words and emotions of an ordinary couple describing how they failed to cope with their daughter's condition and how they were failed, repeatedly and almost unbelievably badly, by much of the medical profession.

What I found most moving in this piece, written by Helena Enright from discussions and interviews with the family, is that while they didn't direct blame anywhere they were angry with the way they were failed, and in the way that they themselves failed their own daughter. The father and mother are played by Charlie Coldfield and Helena Enright and we see them, in their own words delivered falteringly and completely believably, through the 10 months from their daughter becoming ill to her death. Jessica Beck's direction has a light touch allowing the story to be told without distraction (a distinct improvement over TV docu-style!) and allowing the emotions to be felt without the story becoming depressing or maudlin.

This is not a sob-fest, it is not even a depressing piece, somehow, out of this terrible situation the sheer normality and simplicity of these people's emotions makes it a fascinating and compelling story to watch. Indeed it is that very normality and the matter-of-fact delivery that makes the real emotions around the death itself so stunningly effective - the emotional journey of these people is so powerfully depicted by their attempts to be strong that the few times that we see them crack produce a completely unforced sympathetic response from the audience.

My own father's death from sarcoma (not bone in his case) and my mother's attempt to give him (and us) one last holiday which resulted in an air ambulance trip home and his death shortly afterwards meant that this piece spoke very deeply to me ... but listening to the audience afterwards it was clear that everyone felt some connection with the piece ... cancer will hit one in three, no family wont have had to go through something that this story touches on, even if the sufferer survives ....

This is a short run of a powerful piece and I for one am very glad I had a chance to see it ...

2nd Jan 20 :: 25th Anniversary
UKTW enters its 25th year ...
27th Oct 20 :: ATG Postpone Opening
ATG have postponed the re-opening of their theatres again.
23rd Jun 20 :: Utilita Live From The Drive-In
A range of live drive-in concerts across the UK.
4th Nov 20 :: New Server
UKTW is moving to a new server.
6th Jul 20 :: Government Rescue Package
Government to provide a £1.57 billion rescue package for the arts.
13th Nov 20 :: Review: What a Carve Up
Streamed performance by Henry Filloux-Bennett, based on the book by Jonathan Coe.
13th Dec 20 :: Review: Dick Whittington - A New Dick In Town
Seen at Above the Stag
26th Oct 20 :: Review: Next Thing You Know
Seen at the Garden Theatre at Eagle London.
13th Dec 20 :: Review: Frostbite, Who Pinched My Muff?
Seen at Garden Theatre at Eagle London
11th Aug 20 :: Review: Wonder Walk
A walking theatrical experience in the woods