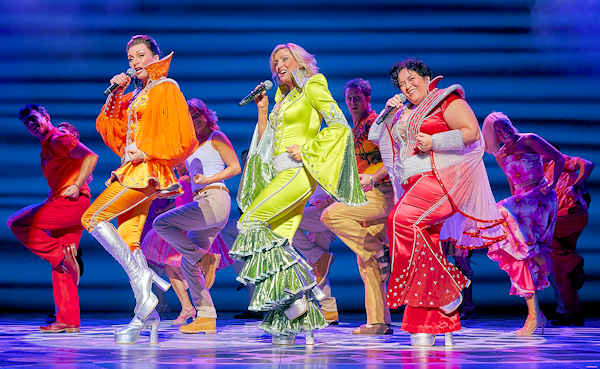 Featuring the music of Abba, Mamma Mia should be a fun, light-hearted evening of toe-tapping entertainment. Certainly, the storyline lends itself to it; 20-year-old Sophie is about to get married on the small Greek island where her mum runs a tavern. Sophie is desperate to invite her father to the ceremony but not knowing who he is, she invites the three possible candidates hoping that she’ll know him when he arrives. Perhaps, with a different cast, and under different direction, Mamma Mia would have been an altogether more enjoyable evening out, but sadly, last night’s viewing felt like a chore. There were highlights; the group choreography was good, and the enthusiasm from the chorus was admirable. I also enjoyed the staged performances from Donna and the Dynamos; “Super Trooper” and the final performance of “Waterloo,” but overall the show was weak and lacklustre.

Abba songs are notoriously difficult to sing, I realise, but given that this show consists solely of their songs, it baffles me to see actors cast in lead roles who cannot sing well enough in their lower register to be heard. Not only that, but the backing vocals track is turned up so high that also drowns out a lot of the vocals that are in their range, because the main performers are not able to battle against it.

The acting from Lucy May Barker as Sophie was weak; her line delivery exceptionally poor. Because of this, it is hard for an audience to feel any emotion for her at all. I was so unconcerned by Phillip Ryan’s presence, as Sky, that I couldn’t pick him out at the end. As Sophie’s potential fathers, Richard Standing, Tim Walton and Christopher Hollis were okay at best, but clearly nowhere within the right age range, Richard Standing looked as though he was the same age as the daughter he could have possibly fathered.

As Donna Sheridan, Sara Poyzer turned in a decent performance, and Jacqueline Braun and Emma Clifford as her two best friends were certainly the strongest cast members, but this show seems to be waiting to get from one musical number to another, with little to no thought to the dialogue in between. To me, that doesn’t constitute a good piece of theatre.

I was certainly far from the only one who felt it; after the interval we counted no less than fourteen empty seats around us, which to me seems unnecessarily harsh but is certainly a sign that the show is not up to standard. There were not many laughs forthcoming from the audience, but it seemed as though the entire place was waiting for the inevitable medley at the end, because at that point everyone got to their feet and started to dance and cheer.

One woman in the bar likened it to being stuck on a raucous hen night and I guess that’s the crux of it; if you’re looking for an evening out with a group of friends where you’re guaranteed plenty of sexual innuendo jokes and a sing along at the end, you could do worse than this. If you enjoy immersing yourself in a compelling and enjoyable piece of theatre, you’d be better to avoid it.