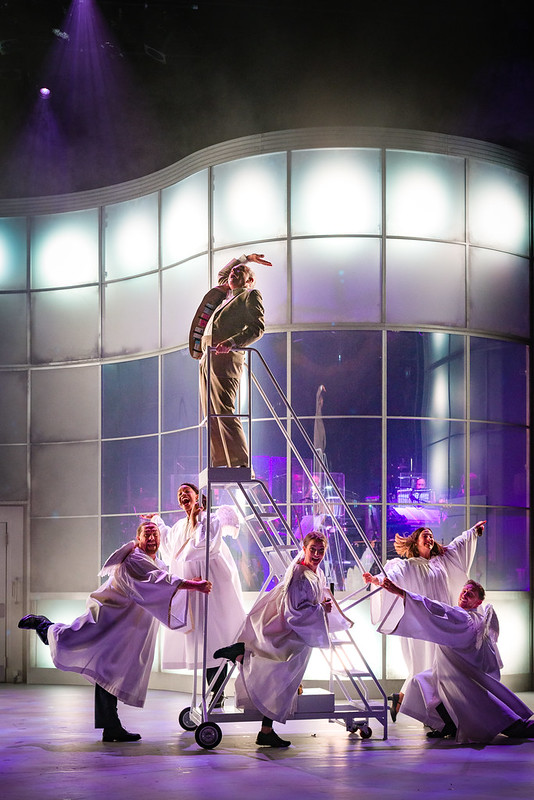 NHS The Musical was first performed in 2006 in The Drum at the Theatre Royal Plymouth. This version has been seriously updated to reflect the currect pressures and strains on the NHS and the impact of the recent (current?) COVID pandemic.

Essentially this is a bit of a love song to those people who work in the NHS and keep it going; from consultants to porters, cleaners to nurses to GPs. It is also an overt criticism of the politicians and "big Pharma" who exploit and hamstring it.

There is a short sequence on the origins of the NHS, how the world was before it and Nye Bevan's great vision, but mostly it is a look at the players acting on three patient journies; the obese, the apparently fit and the old. The stories of these patients are interspersed with statistics, quotes and video snippets projected onto the excellent set as each moves from deciding to "do somethhing about it", through their GP to final resolution, days to  months (condition and age dependent) later.

Whilst the specialist vocabulary of the medical profession doesn't necessarily lend itself to the production of smooth lyrics I was suprised how well they had mangaged to fit them in - Gilbert & Sullivan would have been proud and all hail to the verbal dexterity of the singers.

As with the NHS itself this is a team effort with the cast all playing several parts and shifting the set about as required. The band were excellent and it was touching to see the NHS Community Choir on stage at the end - I would have liked more of their input but they are, as we had just been told, busy souls.

Most of the set pieces worked well with a few perhaps not being as engaging as might have been hoped and occasionally the pace flatlined a little. Perhaps, in bringing the show up to date we could have had more mention of mental health provision, the struggling ambulance service and other areas but COVID couldn't be ignored and maybe pushedt hose ideas out - if the show takes on its promised tour then hopefully it will adjust with the changing times anyway.

This is a bit of a mixed bag and at times it seems unsure whether it is lecturing us or entertaining us - it is also a bit black and white over who are the good guys and bad guys but this is a celebration of the people working in the NHS and that is something we can all get behind.