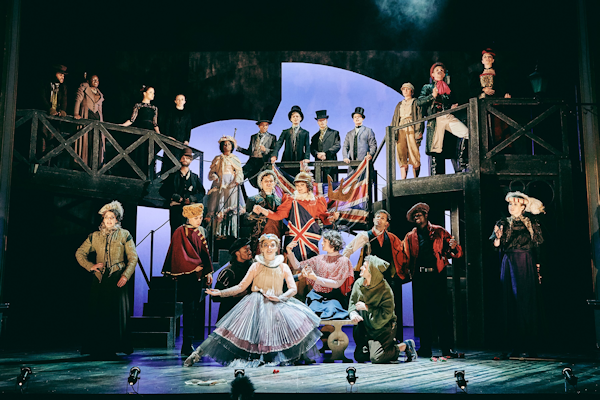 The Life and Adventures of Nicholas Nickleby - seven and a half hours of Dickens courtesy of Bristol Old Vic Theatre School with Part 1 being 3.5 hours (including one interval) and Part 2 being 4 hours (with one ordinary and one short interval). A genuine tour de force for the cast and crew as well as for the audience!

I have seen a few really long two-parters and the measures of a good one is that the time seems to just whizz by and you can't believe how long you have been there, moreover, at the end, you're sad it is ended as you have engaged so fully with the characters. This production certainly falls into that camp, I barely noticed the time pass and it would have been ok for the audience and myself (if not the cast) had it gone on longer!

Dickens' Nicholas Nickleby is full of the ups and downs of life, strange characters and Victorian values - by which I mean, the class divide and disregard for the lives of the poor. All of this is brought to the stage in David Edgar's adaptation originally brought to the stage by the RSC. A cast of 26 take on the story's population with most doubling (or more) except for a few "principles" such as the Nicklebys. Although the Nicklebys and a couple of other characters carry the bulk of the story this is definitely an ensemble piece with everyone pitching in to the crowd scenes, minor characters and scene moving - there really are no small parts, and no small actors.

Directors Geoffrey Brumlik and Jenny Stephens have mastered the script and produce a production of pace and interest - for me the scenes would have been slightly slicker if overlapped slightly rather than dropping into near black-out but it is a small point that didn't detract from the excellence of the overall audience experience.

If this young cast and creatives are an example of the current crop of talent then theatre is in mighty safe hands for the future - there were people that I confidently expect to be adding to the UKTW database in years to come as their careers grow. The overall level of stagecraft and confidence was quite amazing with some genuinely excellent performances. Churlish, perhaps, to single anyone out but for my money; Eva O'Hara (Kate), Kel Matsena (Nicholas), Freddy Sawyer (Noggs), Rosie Taylor-Ritson (Tilda++), Heidi Parsons (Madeline++) while the Cheeryble brothers (Jonathan Oldfield and Lawrence Haynes) provided some well pointed comedy.