Theatre in the Pound 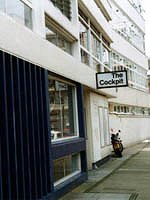 There is little theatre you can see in London for £1. There are also few, if any, evenings you can get that will give you so much variety and value for money.

The Cockpit Theatre has put in place a series of evenings called "Theatre in the £1", and audience members pay just £1 to get in. For that, they get four to seven individual productions over the course of the evening. These productions are mostly professional as the exercise has been promoted as a chance to show, or try out, new works in any format. In fact, the only rules are that there are no stand-up comedy acts and no bands. Apart from that, you get the black-box acting space for any performance of up to 20 minutes that is legal in the UK!

On the evening we attended, we saw six shows featuring a wide variety of styles. Firstly a short sketch by Glenn Wilcox, very well acted by Clare Hannan and Shelley Wilcox. It's amazing how much characterisation you can pack into such a short piece and how much effort a creative team will go to to put a set on stage for so short a scene.

The second act was an example of Raqs Sharqi dance to the music of Oum Kalthoum. The performance by Lisa Wedgewood was fluid and assured though it made me feel life I should be sitting at a table drinking small, strong coffees and clicking my fingers for a fan to brush away the flies.

The third was a devised work based on the folk tale of "The Seal Bride" and exploring longing and belonging. Anna Egseth's strong presence on stage and the strong staging itself provided a powerful piece of theatre.

For a complete change of pace, Raquel Torres offered a performance piece of movement, words and interaction. Staged against a large transparent screen using a stepladder, some shoes and a toilet as the only props, four people told stories of relationships and reactions to modern life with humour and insight.

The last event of the evening was Christopher Durang's "Beyond Therapy". Sadly, this one was the low point of the evening for me as it lacked drive both in the writing and acting. However, as it only effectively cost me 20p and 15 minutes of my life, I won't hold that against it.

There is a brief interval between each mini-production and a mid-evening interval that's a bit longer. In the future, the Cockpit hopes to mount additional solo works in the bar during these periods. Check out future dates, it's a good way to spend an evening - and a pound.