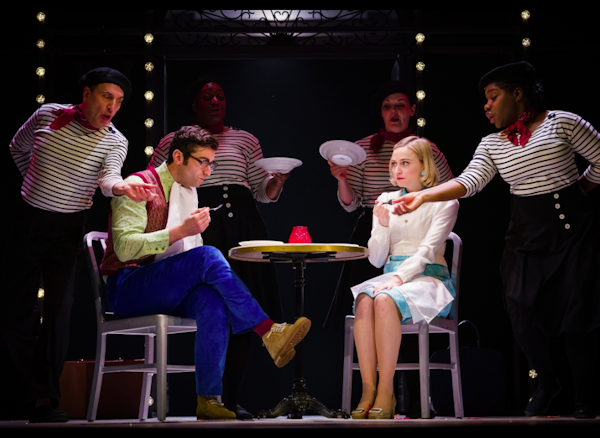 Bienvenue dans la belle France pour une histoire romantique ... fortunately, the magical chocolate translates the play into English for us, but without losing any of that wonderful, laid back, French feel.

This is a gentle, romantic, funny musical with two curiously flawed central characters and an amazing cast of characters.

Based on the French-Belgian film "Les Emotifs Anonymes" this Emma Rice adaptation is full of charm and gentle humour. A woman who makes perfect chocolate but is too shy to speak and a man who runs a failing chocolate factory but is too up-tight to change, ride a beautifully paced journey into each other's arms.

Meanwhile, a small cast produce a large company of chorus and characters swirling around the central story - until the bow at the end I never did work out just how many there were on stage as the changes were often so fast and the characterisations so convincing that I could easily have believed there were twice as many actors as actually took the standing ovation!

Music is very French and spills out into the foyer at the interval and somehow they manage to make this a really intimate and involving evening. No shocks, no real roller coasters just a beautifully crafted evening of romance that gently carries you along.