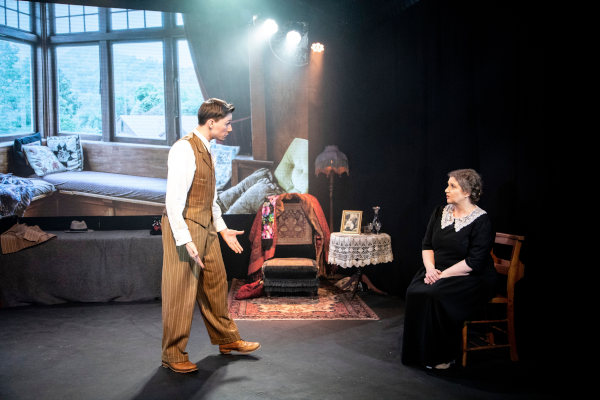 This is an intriguing story, but unfortunately, in telling it, Glenn Chandler relies on too much exposition over action. This may be a consequence of only having three actors who only play three characters. Sydney himself starts the show with “Where is my solicitor?”

“Sidney Fox’s Crime” tells the true story of Sidney Fox, a con man and thief who was also a rent boy who slept with the great and the good in the Roaring Twenties. Sad that we only hear reports of this extravagant behaviour. He travelled the country defrauding banks and wealthy aristocrats with his mother, to whom he was devoted. On the night of the Wall Street crash, Sidney rushed downstairs to say their hotel room was on fire. His dead mother was found on the bed. An inquest recorded a verdict of death by misadventure, and she was quickly buried. When it was discovered that Sidney had insured her life, he was charged with her murder and Mrs Fox was exhumed. The evidence against him was circumstantial, until Sir Bernard Spilsbury, the celebrity pathologist, revealed controversial evidence at the autopsy which changed the verdict.

Mark Curry as Fox’s barrister J. D. Cassels makes their initial exchanges effective. His concluding speech to the jury is powerful and left me wishing he had been given more to do.

In Sebastian Calver’s Sidney, I wanted more cunning, deviousness and wit for such a practised con-artist. Calver did not persuade me of Fox’s seductive allure – maybe more could have been made of his statement “I like you” to his barrister. He would benefit from calming some of his more frantic responses.

Amanda Bailey floats in and out of the story as Rosaline Fox. She successfully offers a peculiar character, being a mix of audacious, suggestive and innocent.

Sidney and his Mother complete several dance routines choreographed by Carole Todd– currently they are too placed; the performers need to relax, enjoy them and allow them to be more realistically messy.

David Shields presents a straightforward set using a video wall, but the images were muddled. Some from the period were set beside very modern pictures which distracted my attention.

It is a diverting show, but suffers from too much reporting and not enough showing. I would like to see the story expanded to include more of the period characters and a more nuanced reflection of the attitude to homosexuality at the time.