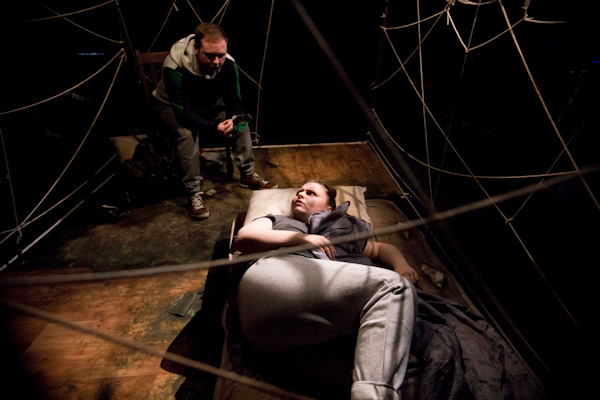 Two characters. Squatting in a bedsit. Hiding from an unexplained past. Surviving on alcohol and shoplifted food. Going nowhere… And that’s the problem. The play is so obtuse, lacking narrative drive or purpose that it does not deserve such a quality production. If the writer cannot bother to name his characters, (Vladimir and Estragon perhaps), why should I care about them? Sadly, I didn’t, as the play unsurprisingly looped back to repeat its cycle. Within this hour, however, there are some striking passages and comic lines which are delivered beautifully by the two actors.

The first impression is good: a scruffy room enmeshed in a loose rope net or spider’s web with the characters mooching inside. Clever lighting sets up excitement. An unsettling soundtrack continues the atmosphere, blending with real sounds from the street outside. Michael Black and Alana Connaughton make a believably unattractive couple trapped in this mysterious netherworld. Their complaints, jokes and arguments ring true, but the script gives them nowhere to go.

The production is good: the play disappoints.

2nd Jan 20 :: 25th Anniversary
UKTW enters its 25th year ...
4th Nov 20 :: New Server
UKTW is moving to a new server.
13th Dec 20 :: Review: Frostbite, Who Pinched My Muff?
Seen at Garden Theatre at Eagle London
13th Dec 20 :: Review: Dick Whittington - A New Dick In Town
Seen at Above the Stag
13th Nov 20 :: Review: What a Carve Up
Streamed performance by Henry Filloux-Bennett, based on the book by Jonathan Coe.
23rd Jun 20 :: Utilita Live From The Drive-In
A range of live drive-in concerts across the UK.
6th Jul 20 :: Government Rescue Package
Government to provide a £1.57 billion rescue package for the arts.
11th Aug 20 :: Review: Wonder Walk
A walking theatrical experience in the woods
19th Oct 20 :: Review: Buyer & Cellar
Seen at Above the Stag
26th Oct 20 :: Review: Next Thing You Know
Seen at the Garden Theatre at Eagle London.