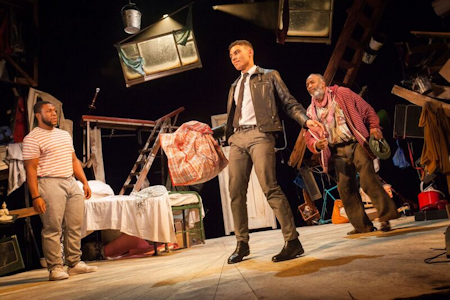 As relevant today as it was when written, The Caretaker looks at three men trying to find their place in the world; work, friends, family, future and ultimately 'home'. Aston (Jonathan Livingstone) is a damaged individual who has spent time in an asylum and received life changing electro-shock therapy, one day he brings home a "man of the road" (Patrice Naiambana) and offers him a place to stay. From time to time Aston's brother Nick (David Judge), an agressive outside influence and owner of the property, enters and stirs things up. The superbly strong cast deliver an engrossing performance.

To be honest, nothing much happens as this is a play about people and relationships rather than actions. All three of these men have plans they are unable to make happen because of contrived excuses; Aston wants to renovate the house but needs to build a shed first, Mick wants to create a penthouse and expand his business, but blames others for his inability to get it done and Davies wants to get to Sidcup but it keeps raining! Their ability to communicate with each other, verbally or emotionally, leaves them doomed to forever remain unfullfilled and 'homeless' desite having roofs over their heads.

Pinter's The Caretaker was first performed back in 1960 and contains language and attitudes prevelant at the time which would, perhaps, shock a modern audience for all the wrong reasons. It is not for this reason, nor reasons of required diversity, that The Caretaker is played with a black cast, but it does take the sting out of some of the dialogue and allow us to accept it for what it is without our modern context. 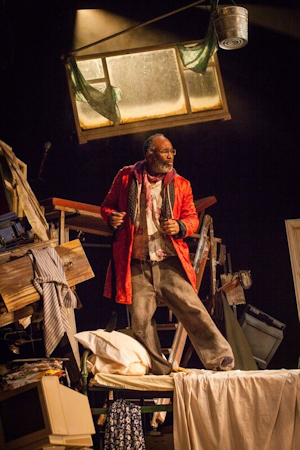 Oliver Townsend's set provides the perfect forum for the play, at once claustrophobic and expansive it defines the small room in which the action takes place whilst giving hint to the ramshackled house in which they are situated and the world beyond - with a beautiful final few seconds where we see that this is one instance of a situation repeated again and again behind similar non-descript doors. Period, which is not really relevant. is a bit uncertain with the dialogue unchanged but items of the 80s and 90s in the mix of the room and a shopping trolley that looked pretty recent.

The play was long, but didn't seem it as I was enthralled throughout, both by Pinter's beautiful script and the playing. The pace Christopher Haydon achieves, subtley manages to allow us to fully absorb the dialogue without slowing the show. And what dialogue it is, all the beautiful of Pinter is here, the lists, monosyllabic responses, random thoughts, hidden threats and intricate detail - having lived in North London I particularly enjoyed Mick's earnest bus route descriptions!

I thoroughly enjoyed the evening and would highly recommend it ....