4
A more detailed review of the current touring production.
By Becky
The Curious Incident of the Dog in the Night-Time>> 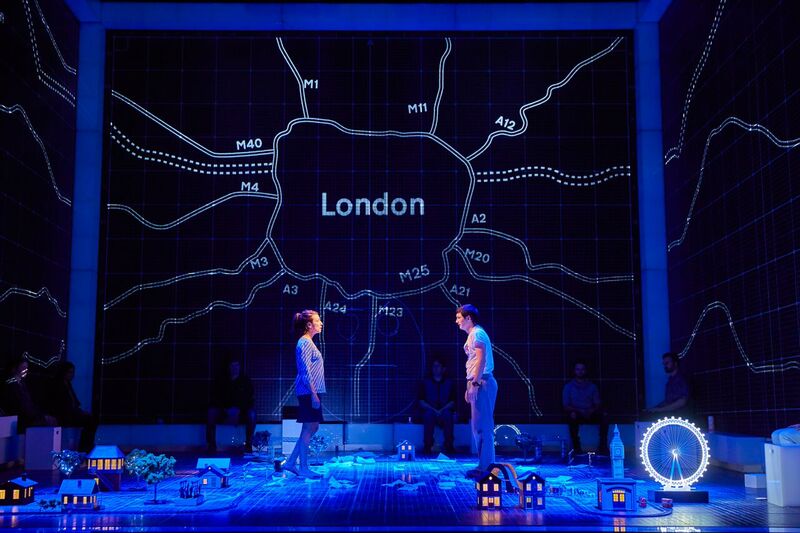 The Curious Incident of the Dog in the Night-Time returns to Bristol Hippodrome as part of its UK tour. Adapted from the bestselling novel of the same name by Mark Haddon, director Marianne Elliot brings to life the story of Christopher’s life as he tries to solve the mystery of who killed Wellington, his neighbour’s dog, with a pitch fork.

Life is not easy for Christopher; he has a severe form of autism, meaning he cannot be touched and finds it difficult to understand the complexities of human emotion and interactions. However, he is also a maths genius, has a pet rat named Toby, and, as he discovers, is good at going on adventures.

Curious Incident has been touring and on in the West End for some time now, but the show is still fresh, the story still impactful, and the staging still exceptionally clever. Sadly, the sound at the Hippodrome lead to some words being lost; not a fault of the actors or director in any way, but something that really needs to be sorted. At times I wondered if the mics were even working. They were, but not effectively.

The ensemble cast were all great in their many varied roles. In particular, Eliza Collings as Christopher’s Headteacher, brought many laughs to the evening. As Siobhan, Lucianne McEvoy was every bit as warm and caring as a SEN 1:1 should be; the character is a perfect reminder of all the hard work and dedication that mentors in special needs schools bring to the role. Siobhan is trtying to teach Christopher how to behave within the boundaries of society, and she is both excited and fearful for him as he grows up. McEvoy did a great job of getting all that across. Scott Reid was sensational as Christopher; a role that requires huge amounts of commitment, hard work, and talent. His perilous journey through London, and subsequent fear over where he belongs, moved me nearly to tears. What really broke me, however, was the slow rebuilding of his relationship with his father, perfectly executed by both actors.

Unsurprisingly, the evening ended with a standing ovation, followed by an explanation of a maths A-level question that had something to do with triangles and squares but which went way over my head. Sound issues aside, if you’re looking for a powerful, lovable, moving piece of theatre, The Curious Incident of the Dog in the Night-Time is perfect viewing.

4
6th Jul 20 :: Government Rescue Package
Government to provide a £1.57 billion rescue package for the arts.
23rd Jun 20 :: Utilita Live From The Drive-In
A range of live drive-in concerts across the UK.

2nd Jan 20 :: 25th Anniversary
UKTW enters its 25th year ...
24th Feb 21 :: Review: Romeo and Juliet
Streaming filmed version
13th Dec 20 :: Review: Dick Whittington - A New Dick In Town
Seen at Above the Stag
13th Nov 20 :: Review: What a Carve Up
Streamed performance by Henry Filloux-Bennett, based on the book by Jonathan Coe.
13th Dec 20 :: Review: Frostbite, Who Pinched My Muff?
Seen at Garden Theatre at Eagle London
12th Nov 13 :: The Addams Family in the UK - Updated
Amateur licence released for the UK.
26th Oct 20 :: Review: Next Thing You Know
Seen at the Garden Theatre at Eagle London.
6th Jul 20 :: Government Rescue Package
Government to provide a £1.57 billion rescue package for the arts.
11th Aug 20 :: Review: Wonder Walk
A walking theatrical experience in the woods
23rd Jun 20 :: Utilita Live From The Drive-In
A range of live drive-in concerts across the UK.